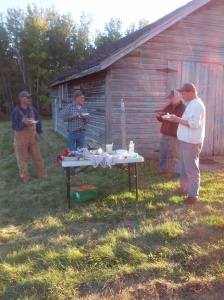 harvest is in full swing out here on the farm, and because of this, curly has been working very long hours for several weeks. saturday was poop’s second birthday and following the tradition we started last year, we had a field supper to celebrate.

for those of you who don’t know, a field supper is just what it sounds like. supper, served in the field to the men and women working their buns off to get the crops in. often it’s the farm wife getting the food prepared and delivering it to the field (unless, of course, she’s in a combine. i mean, it IS 2012 after all!) as it turned out, the boss’ family was very busy with outside activities saturday, so my offer to make supper and bring it out was appreciated. field suppers need to be filling, nutritious, and easy for the guys and gals to eat. (it’s pretty hard to cut a steak when you’re standing up) i made chili and cornbread muffins and the world’s best chocolate cake for poop.

we pulled into the bin yard and curly was right behind us in the semi. the boys were so excited to see their daddy!!! they’ve only seen him for a few minutes in the mornings for close to 5 weeks. poop was wiggling so much i had a hard time unstrapping him from his carseat. he was running before he hit the ground! it was so sweet to see him race over to curly and wrap his chubby arms around his daddy’s knees.

i set up the table for supper and the guys showed up a few minutes later. everyone ate and talked and laughed. we had some birthday cake and gave poop his present.  it was a short, but nice, break, 30 minutes from start to finish.  it means so much to curly to be able to spend some time, no matter how short, with his son on his birthday. it’s a tradition we plan to keep for as long as curly is a farmhand. i know poop will treasure the memories of his special birthdays in the field, just as we will.

i live on the beautiful Saskatchewan prairie with my sweet man, my two darling boys, our dog trixie, 5 cats, three chickens, two horses, and a zillion frogs. i started sewing when i was 10 and did garment sewing for many years before i discovered quilting. i have been obsessed with quilting since 1994. i am self taught, so i may not do things 'by the book', but i don't think the quilt police are too concerned about l'il ol' me. my quilts are made to be loved and i hope i outlive them all! View more posts

2 thoughts on “Fall on the Prairies”