Back in February. I had a lady contact me on Facebook about completing some quilting for her. We had a few false starts, but were finally able to connect in the middle of March. She told me that the quilt was for her young son, as she was expecting and he would need to move to a big boy bed soon. We discussed some ideas and went on our way.
When I got it home, I realised that I had really dropped the ball. I had neglected to go over all of the things that are standard when I take on a new client, specifically backing size. For those unfamiliar with longarm quilting, it can be a surprise to learn that backing and batting need to be about 4 inches larger than the top on all sides. I don’t know why I hadn’t mentioned it as it’s part of my spiel, but I hadn’t and the backing wasn’t large enough. I quickly contacted her and we talked over some options. She asked me to see if I had anything that would go and i said I’d get some pictures to her right away. I lied. hahaha! I ended up getting called in to work at the library and my boys were home for spring break, so I had the energy of a sloth. It took me a week before i got some pictures to her. Then I heard nothing for a couple of weeks. I sent her a message. No reply. I tried again the next week. No reply. I was worried that something might have happened. Turns out I was right! She had been in the hospital, having her new baby! There were a few complications so she was there for a few days, and then was busy at home settling in with a toddler and a new babe. She tried to order more of the flannel she already had, but the shop had only a metre in stock so she would have to wait for it to come in. 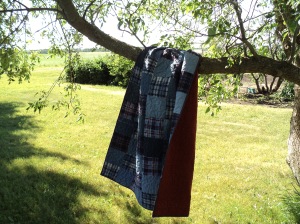 Finally, in the middle of May, she got her fabric in. We made arrangements to meet, and I let her know that I wouldn’t be able to get it done until the following week as I had plans to go to Edmonton for the long weekend with my boys. That turned out to be the trip from hell. My van broke down at 10:30 at night in the middle of a rainstorm on a super busy highway. Thankfully, we were close enough to Edmonton that my Mom and Dad were able to come rescue us. My Dad and Uncle went out the next morning only to discover that a bolt had broken and it would need to go in somewhere to be repaired. As it was the long weekend, everything was closed until Tuesday. Sigh. We got an unexpected week long holiday, and made it home ok. I was able to get started on the quilt last week, and after a few hiccups, I got it off the frame yesterday. 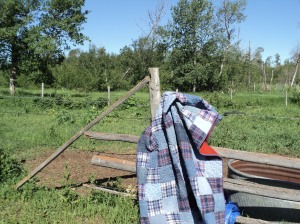 It turned out great! I love the denim and flannel patches, obviously made from worn out clothes. I love that something that most would throw away can be turned into a beautiful quilt that will give warmth and comfort to a sweet little boy for many, many years. 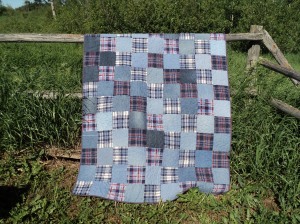 I quilted it with grey Essential Pro thread from Connecting Threads, and used the Bumpity pantograph by Four Paws Quilting.
I also did the binding for her and she chose Line Dance from the CT Patriotic Minis line. It looks so nice with just that touch of red! 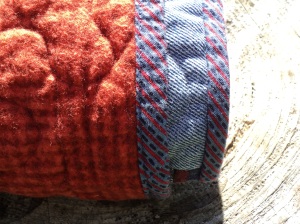 It took ages to get this quilt done, but it turned out so well it was worth the extra time.

I hope you all have a wonderful weekend!!!!

i live on the beautiful Saskatchewan prairie with my sweet man, my two darling boys, our dog trixie, 5 cats, three chickens, two horses, and a zillion frogs. i started sewing when i was 10 and did garment sewing for many years before i discovered quilting. i have been obsessed with quilting since 1994. i am self taught, so i may not do things 'by the book', but i don't think the quilt police are too concerned about l'il ol' me. my quilts are made to be loved and i hope i outlive them all! View more posts

2 thoughts on “A Long Time Coming”